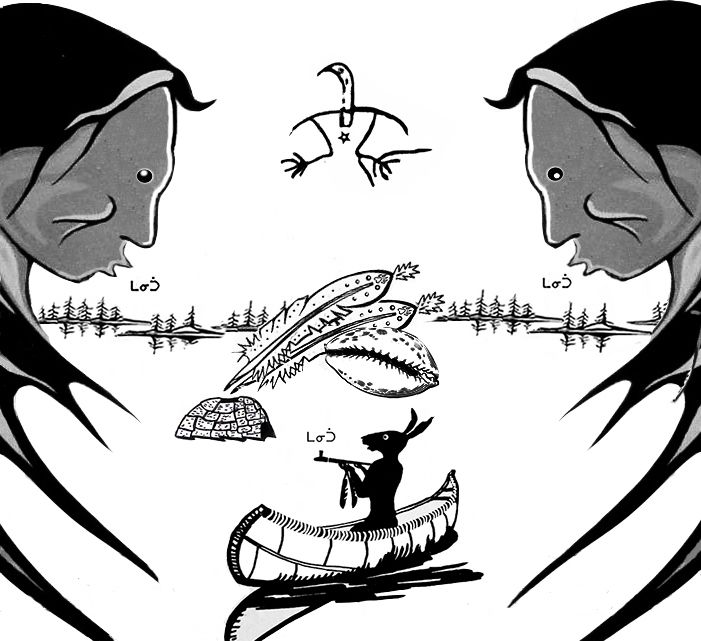 The Amazing Story of Two Spirit Thunder and the Thunderbirds, line art by Zhaawano Giizhik © 2020. Click on image to read the story behind the illustration.

Boozhoo, aaniin! This page is dedicated to those of us who walk in two worlds. By this I mean the many brave women and men belonging to our Turtle Island Nations who are, what is called in modern dominant society, LGBTQ, or gender-variant.

LGBTQ is an umbrella term that does not sit well with most Native Americans, and certainly doesn't do justice to our cultural perspective of "Two-spiritedness."

To be able to fully understand the topic of "Two-Spiritedness," it is important to understand that the Christianization of Indigenous societies, by destroying our traditional concepts of gender and sexual diversity, has infused a lot of confusion in the hearts and minds of our Peoples.

Because of this, our ᓃzᐦ ᐅᒋᒑgᐗg (two-spirited people), even in our modern day and age, must struggle daily with persistent and wide-spread homophobic prejudices -- haw sa, sometimes even by people from their own (Indigenous) communities. "Two-Spirits," therefore, deserve our support and our respect.

To what extent Two-spiritedness defies the typical dichotomous western perception of gender roles is perhaps best demonstrated in our language.

In Anishinaabemowin, the Ojibwe language, we use many terms to denote Two-Spiritedness. Such as: Ogichidaakwe, plural ogichidaakweg: warrior women, or literally, “her brave heart." Also called, ininiikaazo/ikwekaazo, plural ininiikaazowag/ikwekaazowag, old Ojibwe words for “One who endeavors to be like a man/woman.”

Another old word denoting transgenders that was used up to the 19th century is eyekwe, plural eyekweg: "man who wears women's clothing." Aayaakwe/aayekwe/eyekwe/eyaakwe literally means: "Exists-Woman," or "Experience as a woman."

Agokwe is a word that also has been used to denote a person who was assigned male at birth but who lived as a woman within Ojibwe society. The plural form of this word is Agokwewag.

In some instances the expression naawe-nangweyaabeg is used: "Those Who Are in the Middle" – persons who are neither woman or man – or both at the same time.

There are instances known of Ojibwe Two-Spirit women who took on men’s roles, classified as either gaa-biiwaabikokwe or aabita-aanakwad. Generally it was a medicine man's area to directly commune with the spirits and it was less common for women to take on this role; a two-spirit following this path was called a Gaa-biiwaabikokwe ("Iron Woman"). Women who were physically good at men's work such as hunting, or warfare, were sometimes called Aabita-aanakwad ("Half Sky").

*“Sapphic” comes from the Greek poet, Sappho, of the Greek Island, Lesbos, famously known among the queers for her writing of love and desire among women. The words “sapphic” and “lesbian” both originate here.

From of old, two-spirited persons fulfill a traditionally sacred, third-gender ceremonial and social role in Turtle Island (Native American) communities and Lodges. It is an ancient phenomenon that since time immemorial has been embedded in some (not all) Native cultures and traditions. In these traditions, "androgynous" or "transgender" persons are seen as doubly blessed, having both the spirit of a man and the spirit of a woman. Since they have two spirits they are seen as more spiritually - and generally also more artistically - gifted than the typical masculine male or feminine female. Some Two Spirit people choose to marry a person of the same sex, while other Two Spirit people choose to marry a person of opposite sex.

Two-Spirit is a moderately modern definition that defies western gender roles. It was born from the understanding that it is our tradition to focus on the spiritual gift and the gender role of a two-spirited person (or of ANY person, fot that matter), rather than to emphasize his or her sexuality. In other words, Two-Spirit identity emphasized on a person's own gender and/or the roles they chose to do in their community and less on their own sexual and/or romantic orientation.

The term ᓃzᐦ ᒪᓂᑑ  niizh manidoo (Two-Spirit) was adopted in English, and created in the Ojibwe language, in 1990 at the third annual Native American/First Nations gay and lesbian conference in Winnipeg, Manitoba, as a replacement for the homophobic European term berdache (from the French word bardache, which means “slave”). The identity itself was introduced by Anishinaabekwe-Métis-Nehiyaw Elder Myra Laramee (Ochekwi-Sipi/Fisher River Cree Nation, Manitoba) through a vision she had prior to the gathering in Winnipeg. Within this vision, Myra shared the vision she had of her Anishinaabemowin name of niizh manidoowag. The decision to adopt this new, pan-Indian term was deliberate, with a clear intention to distance themselves from non-Native gays and lesbians, as well as from non-Native terminology like berdache, gay, lesbian, and trans.

In a time before colonial contact, Two Spirit identity in several Turtle Island communities traditionally involved special work roles in society, e.g., pipe bearers, fire keepers, spokespersons/leaders, warriors/defenders, healers, visionaries, craftspersons/artists, knowledge keepers, caretakers/foster parents, and marriage counselors. The Anishinaabeg Peoples have traditionally certain important ceremonial roles for Two-Spirits; among the most sacred roles is tending the sacred fire, and the willingness to go into long vigils of prayer and fasting -- and, in some instances, literally sacrifice their lives for their people.

As they reflect our beautiful values, traditions, and teachings (that say that ALL LIFE IS SACRED) and at the same time symbolize our modern RESISTANCE against Western/colonial thought and the settler mentality of mainstream society, TWO-SPIRITS, those who walk in two worlds, are the true warriors of our time.

> Back to Gallery
Powered by