"It's safe to say the fabric of the friendship that we share as First Nations artists is a tight and heavy weave made up of our backgrounds, dreams, and visions combined. So that is what this website, and the Fisher Star project, is about: to share personal dreams and a common outlook on life, no matter whose work it is that's being posted on this website, or hanging on walls in houses or community places, or worn on fingers or in ears or around necks or wrists. This, I'm sure, is something we will continue doing as long as our eyes and hands keep working!" 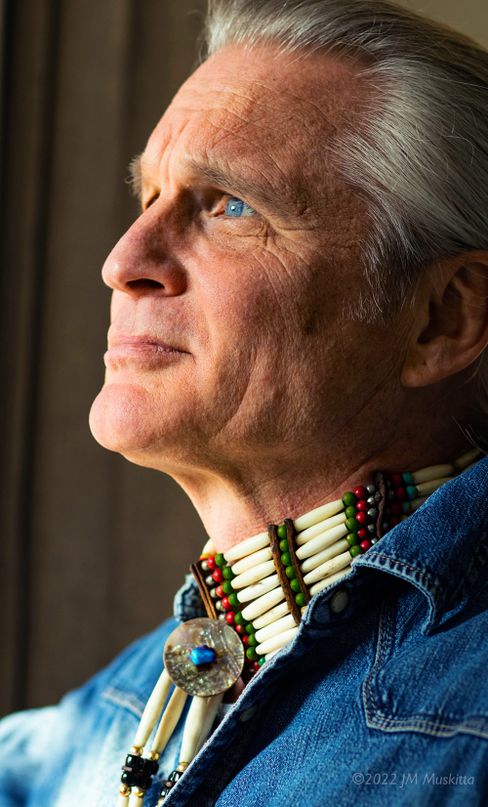 "Hello! My traditional Ojibwe name is White Cedar From The South. Marten is my clan. I am a man of mixed Anishinaabe and European-American ancestry. I come from the place of the Rapids. I am an artist"

I am Zhaawano Giizhik and with a grateful heart I present to you a this art project called New Fisher Star Creations.

We are artists from Turtle Island (North America) with First Nations roots who draw from ancestral Anishinaabe source. In our jewelry, paintings, and writings we tell our People's adizookaanan, or sacred stories — because our sacred stories were used as a teaching tool long before there was a school.

I design and handcraft jewelry and I also have several blogs in which I write about my and kindred artists' art and about all sorts of Anishinaabe culture-related topics; once in a while I enjoy creating graphic work and writing poetry as well.

Although I'm considered to be a Woodland artist as I draw from the same artistic source as my fellow artists, as a jeweler I practice a different discipline than that of the Medicine Painters; yet, as I see it, we all draw from the same source, namely, the sacred stories and pictographs of the Ojibwe Anishinaabeg, Ininewak/Cree, and other Algonkin-speaking Peoples...

“We are artists born and raised under the Fisher Star. We've been sharing the creativity and the stories of our Ojibwe People since the beginning of times. We will do so as long as the Fisher Star shines above.”

Who am I and where does my inspiration come from?

I am a jeweler, a graphic artist, and a writer of blogs about the arts and culture of my People, the Baawiting Anishinaabeg, who are part of the greater nation of Gichigami Ojibwe Anishinaabeg of the Great Lakes area in Canada and the United States. For six centuries or more, Gichigamiin, the Great Lakes basin, whose abundant waters, continually ebbing and flowing with the seasons, feed into the Turtle Island continent and the Atlantic Ocean, has been the home of the Anishinaabe Peoples who for generations have lived close to the water’s edge to survive.

The Anishinaabeg who inhabited the shores and islands of gichigamiin have always sensed and appreciated the powerful majesty of the lakes and their omnipresence in their daily lives; to them, the scarlike slopes and the pretty beaches of colored sand, the isolated caves and countless coves and caverns - as well as the animals and the big and little spirits that resided there - embodied an aadizookaan: a sacred story. They knew the rocks and natural surroundings of the

lakes had always been filled with many mysterious beings and lessons and songs and teaching stories, magically and rhythmically washing ashore by the tidal waves since the beginning of times. But no matter how big and vast the lakes are, no matter how awesome and dynamic their spirit and grandeur, the ancestors knew that gichigamiin were only a part of the MUCH GREATER WEB OF LIFE! They knew that the celestial bodies, the mountains and the lakes and the rivers, the fires, the thunders and the lightnings, the rains and the winds and a myriad of other living things that make up the physical world, were – as if all part of a Great Council - presided by a force called GICHI-MANIDOO (Great Mystery).

I believe these things to be true and do not like at all the Western tradition that encourages us to structure our relationships to the natural world in a merely technical and rationalistic way – are we not being taught in school to draw neat categorical distinctions between living organisms and so-called dead matter, between the animate and the inanimate, between the natural and the supernatural, between the human and the nonhuman, and between linear time and circular time? That is why I have become more and more aware lately that the fundamental key to an understanding of the core and expressiveness of my art, and perhaps even my observational abilities as both an artist and a person, lie in the ancient worldview of my Anishinaabe ancestors - rather than in the classical paradigms of Western thought.

Why am I telling you these things? As a teenager, I was told about this mysterious painter from the area around Lake Nipigon, Ontario. I was told this Ojibwe man was a masterful aadizookewinini (storyteller) who created a visual language that was completely new and who drew upon personal dreams and visions with an intense, unsurpassed level of dedication and commitment. It was only later on in my life that I learned that it had also been the formal Midewiwin teachings of his grandfather, as well as the oral and pictographic history passed on to him in his youth, that provided subject matter for this man’s paintings; and that his artistic legacy and lineage included the mazinaajimowinan, the spirit writings (rock paintings) and petroglyphs of Agawa Bay and Peterborough and the mnemonic imagery that the ancient artists inscribed in the sacred Midewiwin scrolls. See the inserted image showing me offering asemaa (tobacco) at the "painted rocks" at Agawa, whose age-old pictographs were a major inspiration to this man from Lake Nipigon, this trailblazer of an art that woke up my spirit and inflamed my soul and stole my artistic heart.

I was born in 1959, the same year this man called Norval Morrisseau (or Miskwaabik Animikii, Copper Thunderbird, which was his true name) started painting and when I was in my teens it was he and the untamed imagination that radiated from his canvases that opened my eyes to a separate reality - and made me aware of a lot of powerful stuff that was at first hidden inside -, and eventually inspired me into creating jewelry and graphic designs in - what would become known as - the Native Woodland style. The intriguing discrepancy between drawing from ancestral tradition and working on the edge of contemporary art that I discovered in his work has greatly inspired me ever since and I am humbled to be part of a truly unique art form that since Copper Thunderbird drew his first paintings in the beach sand of the shores of Lake Nipigon, openly defies the narrow classification systems of Western thought.

For this, I will always be greatly indebted to him, and I know the same goes for many other artists, as well as countless artists in generations to come...

Reflections of the Great Lakes

> Click here for the sacred story of the Fisher Star.

> Click here for Norval Morrisseau's influence on my work.

> Click here for a statement on the topic of Shamanism.