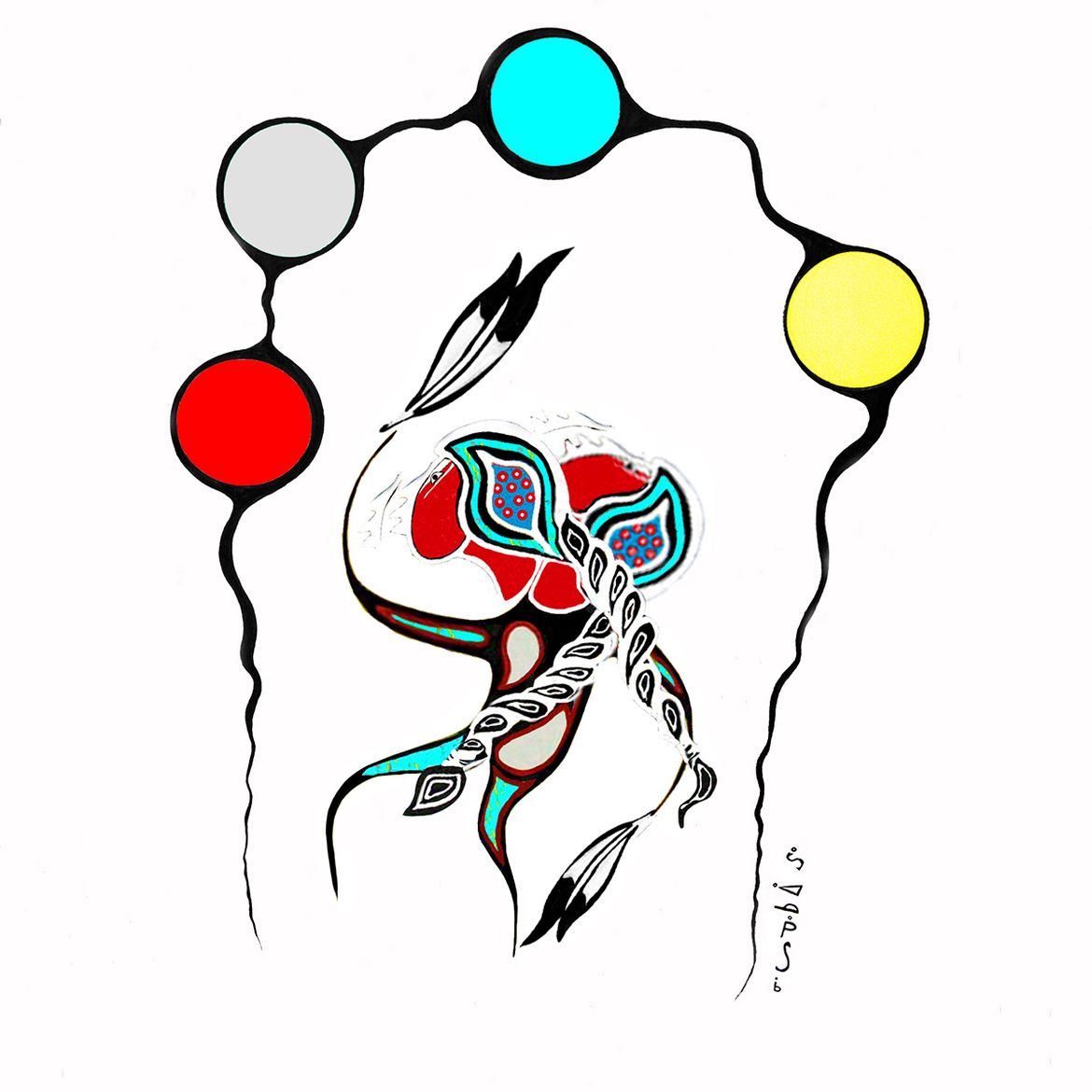 Native Woodland artist Zhaawano Giizhik presents to you with a grateful heart the above digitized 23,622 x 23,622 inch (60 x 60 cm) pen and ink wall print, titled "Powwow Dancer." It is part of a large collection of art prints, conceived in an ancient and most sacred Indigenous tradition of Anishinaabeg and Ininewak (Cree) storytellers.

Zhaawano's elegant line art tells his People's aadizookaanan, their legends and sacred stories — stories that were used as a teaching tool long before there were schools. The stories and narratives that are being shared through his prints are as strongly allegorical as in the old tradition of storytelling, yet they also contain lessons that reflect today’s world. Stylized in the powerful painting discipline of the Woodland School of Art, and carefully wrapped in ancient metaphors and age-old symbolism, each one of Zhaawano's art prints is a teaching mirror, instilling in the minds of those who make the effort to look in it a living sense of the unique worldview, dreams, and visions of the original inhabitants of the northern land of woods and lakes of Turtle Island.

One Anishinaabe aadizookaan describes how after a great deluge Wenabozho, the Original Man, was lowered to the Earth and walked carefully trough Creation; his movements would be emulated in the dancers' steps that to this day leave imprints upon the Earth and upon the hearts and souls of our People who gather at annual powwows across the land...

Although the term Pow-wow - derived from an Algonquian word for "Curing Ceremony" - is not Ojibwe in origin, it is commonly used, not only in Anishinaabe Aki but all over Turtle Island (North America).

The Ojibweg have basically two types of powwow: the traditional/ spiritual/ceremonial jiingotamog as well as niimi'idimaa or social dance contest powwow - in which there is competition in dancing and drumming.

In the old days, when our warriors and hunters had returned to their homes, they told about their feats through dance and many gathered to take part in the celebrations. Movement, color, and sounds, rather than words served to tell the stories of their hearts. These gatherings were not only about dancing and singing; they also served to extend respect or give special thanks or bestow names, and so on. They were the forerunners of the contemporary powwows.

To read more about this topic, see The Way of the Heartbeat: Sound of the Mide Drum.

Go to the webshop to order
Powered by